Problem solving has been the best thing that I have incorporated this year!  It’s more than one good thing.  It is actually many good things that happen every day that I MAKE the time to do problem solving with my students.  And yes, I do have to make the time.

The most important thing that I learned from this activity is that I also need to have students do individual problem solving, so that each student will learn to persevere in mathematics, and not rely on a group member.

I first heard about the Four Fours Problem while taking Jo Boaler’s “How To Learn Math” class this summer.  It sounded like a fun activity and I couldn’t wait to try it with my classes.

After doing Fawn’s PEMDAS Relay earlier in the week, I knew we still had some work to do with the order of operations.  I decided to give them the Four Fours for their problem solving brains.  However, I also wanted their work checked and corrected – but not by me.

Enter the Four Fours Problem GAME.  I reduced the assignment to make the numbers 1 – 10.  I explained the Four Fours, and then had them brainstorm answers for the number 1.  I then showed them 44/44, and they loved that!  Then, they had to fill out the top half of a sheet that I made with the remaining Four Fours problems. 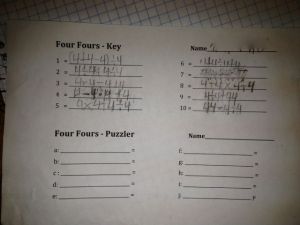 After completing their Four Fours, I had them randomly assign the letters a-j to each problem.  Then, they wrote the problem, but not the solution, on the bottom half of their worksheet.  Once that was complete, they cut the sheet apart and swapped with another student.  That student then worked out their problems to see if they could find which number it equaled.  If they did not get a number between 1 and 10, or ALL of the numbers 1 through 10, someone made a mistake.  Then, they were to get with their partner and figure out who made the mistake. 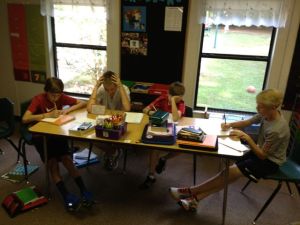 When I first introduced this problem, there were many groans around the room.  I am not used to this so I was a taken a bit off guard.  They did not think they were going to like this lesson.  “Do we HAVE to use four fours?“, “Why are we doing this?“, and “Really?”  I was worried, but, I had planned this lesson so I plowed on.  After a few minutes however, my students were totally into it!  All it took was a friend to go, “I found five!” to get their competitive juices flowing and see this as a challenge.  They worked so hard!  After they started coming up with their problems, they really got into it.  I even had to quiet them down several times with “Other students cannot think if you are screaming!”

Not every student was ecstatic however.  They have been doing problem solving in groups so far this year.  Since they had to trade papers, their problems had to be kept “secret”, so this was an individual assignment.  It was frustrating for several students.  They wanted to quit, constantly wanted me to check their work, or kept begging me to give them “just ONE hint for the number ____ !!!” They even begged me to let them switch solutions for just one number with another student.  “I need two and she needs five.  It’s just one number!”   “NO, you CAN do this!” was my answer every time.

Overall, it was a thrilling success.  At the end of class, I had several students ask me for an additional copy so they could take it home and give it to their siblings or parents, or come up with more Four Fours.  One student wanted to come up with negative answers.  This would actually be a great twist for 7th grade!

After doing this activity in class, I changed the Four Fours sheet to include instructions for the students and I made it a whole sheet of paper so they would have more room to work.

Side Note:  This is more of a puzzle game than an actual competition and students weren’t really racing each other to finish first.  Of course, some students will finish this much more quickly than others.  That actually works out very well.  As they finish, they trade and work each other’s problems.  Then, they work on something else while the other students finish.  I use this time for in class project work but you could also have a row game ready for pairs who finish more quickly.