This was the BEST review activity I have ever done!
I even overheard a 7th grade boy say, “Wow, this is FUN!”  That my friends, is hard to do – especially in math class when we are working on solving multi-step inequalities!

I love math stations because:

This is an activity that I use to review a concept or several concepts.  I make about 8 stations with two problems in each station.  I give each student a blank Math Stations Worksheet .  Then, I assign students to the first four stations.  Station 1 has problems that are less difficult, and as students progress through the stations the problems get more difficult.  Students that need more help start out in station 1 with easier problems.  More advanced students are assigned to higher stations according to their ability level.

I usually put basic problems or review problems in Station 1.  This is a great way to catch students up who have been absent or are just having a difficult time with a concept.  In levels eight and nine, the problems are challenging.  Not all students will make it to levels eight or nine.  But, if they are able, it allows them to work challenging problems instead of being bored doing the same type of simple problems over and over again.

I also have students carry an index card with them from station to station.  When I help a student with a concept (like – remember to reverse the inequality sign when multiplying or dividing by a negative), they can jot it down on the card.  At the end of class, this card has reminders of the things they had the most trouble with.  I have noticed that most students make the same errors over and over.  Hopefully they will use this card when they get stuck or can’t remember what to do.

Edit: After sharing this with Kristen Fouss after posting, she shared this fabulous activity with me!  I loved her color and her cute idea!  All I had to work with was colored index cards, so I colored coded my stations with the index card answers.  This way they can easily (read quickly) find the answers when they are finished with each station.  Thanks Kristen for inspiring me again!  : ) 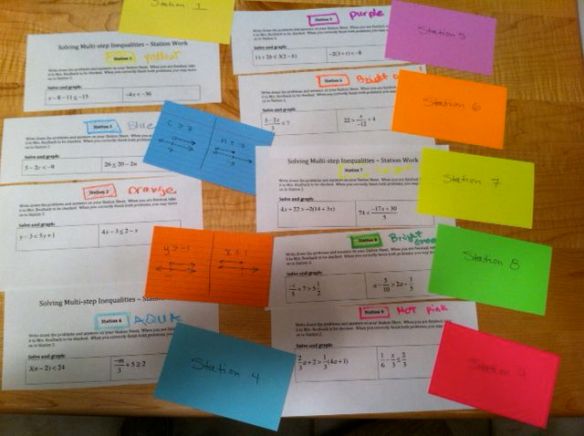 For quick and easy math station creation using a worksheet, read Quick and Easy Math Stations (aka Pimp Your Worksheets).  🙂

Summary – After the Activity:

I have done station before, but this was the first time I did it according to ability level and with progressively harder problems.

Yes, the stations did get crowded sometimes.  And yes, they are middle school students so they did actually fight over the questions and the answers when a station got too crowded!  What do I think about that?  Hello – they are FIGHTING over math problems!  Consider my job DONE.

They wrote great notes on their individual notecard.  However, they kept leaving it behind at other stations.  Anyone have a solution for that?

They worked like crazy the entire period.  It was loud, it was crazy, it was learning at its best, it was FUN!  I walked around and helped when needed.  Some students needed more help than others.

Some students did all 18 problems!  I couldn’t believe it.  There was only about 5 minutes of class left, so I told the finished students to use their work and find someone to help.  I was the happiest when a student who started in level 1 zoomed through all of the levels and finished all 18 problems before the end of class!  Success is a powerful motivator.

Off to a foldable and speed dating tomorrow!