When I saw Dan’s post on Oreo cookies I knew this was meant JUST FOR ME. It was especially interesting because Chris Danielson in part 1 2 and 3, and Chris Lusto in part 1 and 2 also investigated it. I had to jump into the fun. I mean, WHO doesn’t love Oreos?

I have math club once a week and always bring them treats to eat. I’m not below bribery. So, when I saw Dan’s post I thought, “Awesome! I can feed Math Club AND make the food about math at the same time!” #Nguyen for sure.

I pulled the four 4 packages of Oreo cookies I had bought to the “Oohs and ahhs!” of my math club. My 16 kids did the math in their heads instantly, calculating how many Oreos each of them were going to get to eat today. I opened the packages and pulled one out from each, original, double stuffed, chocolate, and triple stuffed. (Side note: I was very disappointed I couldn’t find a mega-stuffed package at the grocery store because I KNEW they would have gone nuts over that.) I then lined the cookies up next to each other. “Any Questions?” I asked as I handed them each a post-it note.

Excitement buzzed through the room as they posted their questions up on the board and then we sorted them.

After talking through all of the questions they decided to work on “Is double stuf REALLY double the stuffing?” I offered to let different groups work on different questions but double stuffing won out! Then, they brainstormed how we could find the answer to our question. Here is what they came up with.

The room was a bustle of activity as the students went to work. I was the “official” weigher so I could ensure all of the results were consistent for a good comparison. All groups decided to weigh and measure several cookies (or cookie parts) so that we could get more accurate results. I was very busy with all of the weighing so unfortunately I do not have pictures of this stage. But I promise, it was fun, messy, and mathy!

After they were all finished they shared their results with each other. It was great because all four groups came to the same conclusion. Based on weight, double stuffed Oreos are MORE than double stuffing compared to regular Oreos! 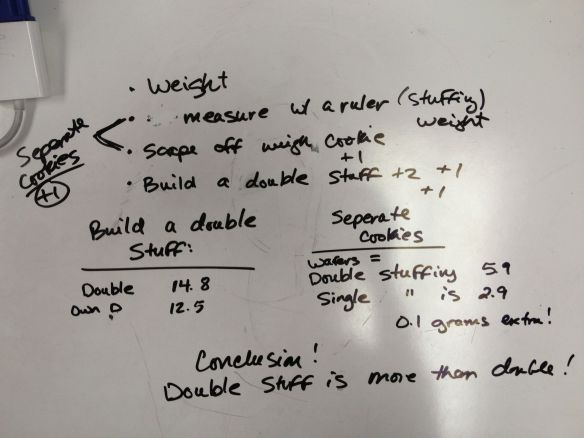 In the end I videoed their conclusions, one representative from the girls side and one from the boys. Unfortunately, my iPhone went wonky and did not record the boys conclusions. this was tragic as they had made their own mega-stuffed Oreo and even had an Oreo dance! Ah, technology!

Thanks so much to the MathTwitterBlogoSphere for making my job so easy! I don’t even have to come up with the ideas – they come to me in my Twitter Feed and GReader (RIP – sigh).

** Edited to say Double Stuf – one f.  Seriously, who knew that?