My students beautifully tackled two step equations with ease, showing all of their steps along the way and solving to perfection!  So, when it was time to graph, I decided that we would spend a day solving for y before learning all of the different forms of the equation of a line.  Sometimes as a teacher, you assume a new concept will be easy for your students.  However, my students are treading through the new waters of Algebra, and what seems obvious to me is not always obvious to them.  After I spent hours making a fun “Solving for Y” Jeopardy game so that would could spend an hour solving equations for y with glee, we instead spent an hour of misery.  The kids were tortured by the problems that they thought were “way too hard” simply because they did not understand what they were supposed to be doing.

My mistake was that I assumed since they could solve for x in two-step equations so beautifully, that throwing a y in there would be no problem.  What I missed was that unlike students I teach in high school, these students had never solved equations with two variables before and simply did not know what to do with them.  Can you add them, subtract them, put them together?  Solve for y?  THAT is not an answer!  We are used to seeing x=12 as an answer, not y = 2x – 5.  Ohhhh….. Finally my light bulb went on.

I felt so bad.  I wasted a day of learning (for them, as I had learned a GREAT deal).  I was desperate for them to see how easy it was to solve for y, and let them get lots of practice at solving for y at the same time.  But, I had already lost a day, and some of their trust.  They did NOT like this “solving for y”.  I had messed up.

So, what do you do when you mess up and want to make it right?  Well, give them candy of course!  ; )  Thanks to an amazing brainstorming session with the wonderful, brilliant teachers on Twitter a new plan was devised.  We would solve for y in the style of “Hands On Equations” with small Solo cups, Hershey kisses, and integer counters.

I used two colors of Kisses (one for +x, one for -x), solo cups for y (sorry, no -y’s), yellow and red integer circles for the numbers, and my “Hands On Equations” equation mats.  I made a worksheet (at end) and modeled the equations with my new best friend, Elmo.  I had them model EACH equation, and write exactly what they modeled (in equation solving form) on their worksheet.  THEN, we moved on to solving without cups and kisses.

When I had 3y = 6x + 3, I asked them, if 3 cups equals 6 Kisses and 3 chips, then how much does EACH cup (or y) have?  By using cups they could actually put 2 Kisses and 1 chip in each cup.  An unexpected plus of the cups was that the students did not once forget to divide BOTH the coefficient of x AND the constant by the coefficient of y! 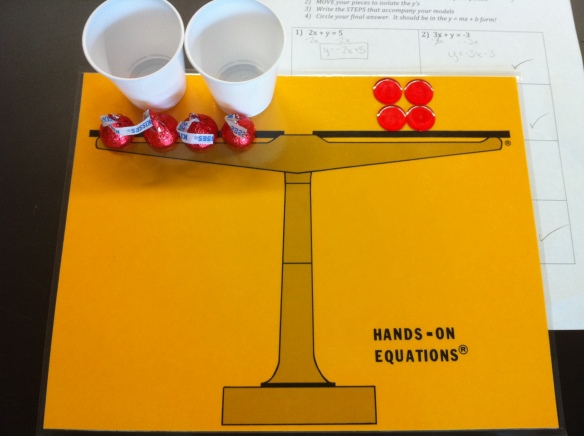 Solving for Y with Kisses and Cups

Another highlight of the activity was the last problem.  It came down to 4y = x + 4.  I was so excited to see the students realize that each cup got 1/4 of a Kiss!  They discovered that they had to split the Kiss into fourths to put an equal amount of Kiss into each cup.  So, the answer was y = (1/4)x + 1.   My HS students in the past have always had trouble extracting the slope when they come up with y = x/4 +1.  I am really hoping Kisses help them greatly with this!  We will see this week as we delve into finding slope!  : )

My favorite part of the whole day was hearing kids say, “Wow, this is so easy!”.  Their favorite part was eating the 6 Kisses I allotted per student at the end of class.

Solving For Y with Cups and Kisses Activity Sheet

12 thoughts on “Solving for Y with Cups and Kisses!”