Today I taught my students about projectile motion.  Well, I say that, but I hate to actually TELL them anything.  I like for them to discover things!  They often make “much ado about nothing” when it comes to the projectile motion equation in Algebra 2, even though it should make sense to them.  They get all caught up in the particulars of the formula and stop thinking about what is actually happening.  So today, before I taught them about the equation, I gave them a picture of a quadratic graph.

I had planned on making up my own scenario, until I saw this terrific post by Sara Vanderwerf that involved a creative fireworks graph.  I loved how Sara described clicking on one aspect at a time.  As soon as I saw this graph, I knew I had to use it!

I did not follow her fireworks task exactly.  Instead,  I just gave them this.  I told my students to create a story with their team from this graph, using as much information as they could from the picture (below). I told them they could write it, or draw a picture, or both.

After they created their stories I had them share with the rest of the class.  As I walked around I heard one students say things like, “No, the rocket doesn’t start at the ground because you can’t start at negative time.”  I loved this part because of the conversations but especially because of the laughter.  Kids were coming up with some hilarious scenarios, and enjoying a math problem.  Here is what they came up with. 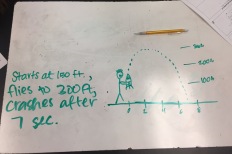 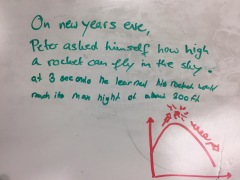 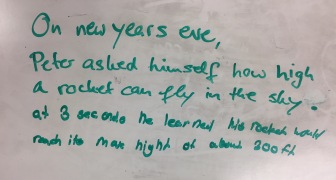 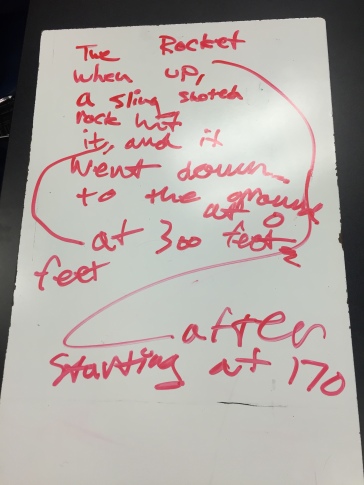 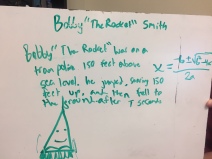 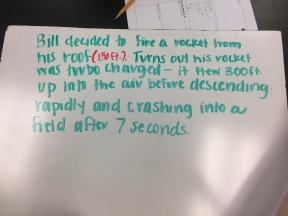 After they shared their stories, I clicked on each piece of the graph as Sara had.  And then I told them to write the equation that modeled the rockets path from the information I gave them.  This is what I left displayed on the board.

I also wrote two different forms of the quadratic equations on the board and told them they could use either form.   Some groups still forgot to include the a, so I had to walk around and remind them.  I loved seeing students pick different coordinates to plug in for x and y. 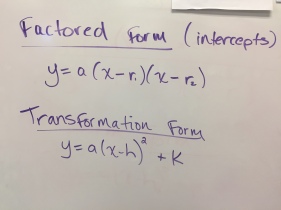 After everyone came up with a = -16, I gave them another problem.  This time I only gave them the roots and the the y-intercept, so they HAD to use factored form.  I am doing the Candy Catapult tomorrow, so they needed practice with this.

After writing the equation, they solved for a and came up with a = -16 again.  As the groups came up with this, I asked each of them to think about what was going on.  Was this a coincidence?  What could be happening?  I had someone in every class realize it was gravity!  In Physics last year (our students take physics at 9th graders), they all used -9.8 m/sec².  I put that into a meter to feet converter so they would realize it was the same thing.

I also had the students convert the equations to standard form so they could see the y-intercept appear in the equation.